My Friends at the Graveyard 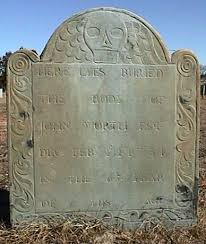 When I was a kid and we went to Massachusetts every weekend, my parents would sometimes drop my brother and me off at a graveyard next door to the grocery, so we could run about while they provisioned the household.  Thus began my lifelong fondness for graveyards.
Morbid?  Not really.  I’m a story junkie, and every gravestone hints at a story.  Some of them tell whole chapters, others are, um, story prompts.  My favorite tombstone ever was that of Miss Lucinda Laird, only daughter of Mr. Samuel Laird, buried in New Marlborough, Massachusetts (in a graveyard that makes a brief appearance at the end of the movie of Alice’s Restaurant).  She died young, Miss Lucinda–in her late teens.  And the stone cutter, proving that “measure twice, cut once,” or “sketch it out before hand, idiot,” are very important guidelines, mis-spelled her name as “Lucinda Lard.”  He got her father’s last name right, and apparently someone pointed out the bobble, because on the tombstone someone chiseled in a caret between the A and R, pointing to a small chiseled I.  Poor Lucinda, going down the long halls of eternity trailing a typo.
I suppose the typo is comical, but I’ve never thought of it that way.  I have a picture in my mind of Lucinda, only daughter (given the time period I’m betting that there were other children who didn’t survive, and probably brothers as well) of Mr. Samuel.  The Lucinda in my mind is slender and slight, with dark hair and a serious expression–life was fairly serious in rural Massachusetts in 1817.  She had dreams and plans, but likely they were the sort we’d consider rather small: a home of her own, a family, health, a measure of comfort.  She died unwed, but I like to think she was courted by a local boy.  Given the time and place it’s likely she was devout, well behaved, trained in the crafts and skills of a woman in a farming community.  I don’t know why, but I see her dying of a lingering illness–the old standby, consumption, perhaps–and the tombstone lets us know she was regarded by friends and family  as an exemplar of a Christian life well lived.  She’s not tragic, Lucinda, but I’ve always wanted to do something nice for her: buy her a dress-length of beautiful fabric, or some ribbons, or take over her chores for a day.  Because to the stonecutter she didn’t matter enough to get her name right–but someone cared enough to make a stink and get that correction made.
It’s tempting to give her 21st century character markers: she was feisty, she was a tomboy, she wanted to grow up to be a lawyer or a singer or dragonslayer. But what if she was a typical girl by the standards of her time?  Not Laura Ingalls or Jo March, but Mary Ingalls or Meg March?  Isn’t she worth a story of her own?
I could write a story about Lucinda Laird, all because of that typo.  Perhaps I will.