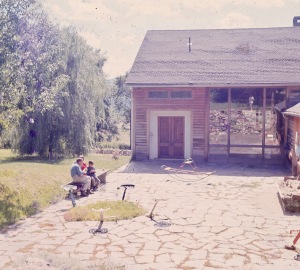 I have on occasion contributed a series to this blog called “Raised in a Barn.” It is a loose series of anecdotes about my, um, colorful childhood, spent between Greenwich Village (in the 1960s) and the converted barn in rural Massachusetts we moved to when I was 13. Want to know what my landscape looked like when I was a secen-year-old: watch The Marvelous Mrs. Maisel*, which is set in New York in the early 1960s. I loved living in New York, which had for me a sort of fizzy tonic effect, but oddly, most of the anecdotes I’ve written up are about Massachusetts, because that’s where the most, um, anecdotal things–the funny stuff, like my brother shooting the bat in the kitchen, or my father talking me into making gallons of marmalade–happened. I think sometimes of collecting what I’ve got and fleshing it out into a full memoir.

Then I chicken out.

The Raised In a Barn stories are by-and-large happy, funny ones. A lot of my childhood was both happy and funny. But some of it was not, because we–my parents, my brother, and I–were human, and no one gets a life that is unceasingly happy and funny. There are stories that are unflattering to both my parents, to my brother, to me. And of all of us, I’m the only one I feel completely comfortable telling unflattering stories about. And then I come smack up against the parallax nature of family memories. My mother is problematic–a complex, talented, funny, generous woman, she was also alcoholic (and not a happy alcoholic; her particular form of alcoholism was what psychiatrists quaintly term “irritable”). My father is less obviously so, but he was human: a talented guy with an outsized ego, also complex, generous, and funny (and sometimes a little irritable himself). And there was me, and my brother, very different people with very different roles in that family. The more we talk, the more I feel that we grew up in two different households.

My mother, the source of a lot of the drama in my childhood, made it clear to me that I should never talk about the family outside the family, a sort of “what happens in Fight Club stays in Fight Club” attitude that, at base, came down to “don’t talk about me.” She objected to my being in therapy because she feared the therapist would tell me “it” was all her fault. Whatever itwas. As irrational as it seems to me, this is a hard rule to turn my back on. If I write a full out memoir… what if I get it wrong? What if I’m self-serving? What if my memory doesn’t align with anyone else’s?

Augusten Burroughs wrote Running with Scissors, a memoir about a childhood that makes mine look dull and uneventful. Some years after, his brother (whose name I regret I cannot recall) wrote a counter-memoir which was also interesting, but had a tinge of “setting the record straight” to it. I suppose that’s one reason to write a memoir. A memoirist might write about a particular dramatic episode in the life (“my valiant struggle to get my twin brother to give up a life in the circus…”). Or about a place or time that is interesting (“I was a six year old at Woodstock!”). Etc.

I guess the story I want to tell is a little bit of all three. The stories I’ve written up here have been humorous, trading heavily on the eccentric nature of certain parts of my childhood. Are they accurate? They’re what I remember. The hardest thing about approaching this kind of writing is giving yourself permission to take a stand, choose a vantage point, say not “this is the only vantage point” but “this was my vantage point, so it’s what I’m writing about.” And that takes some bravery.

I’m not there yet. I hope to be some day.