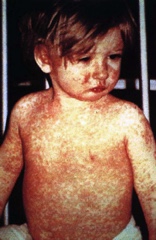 I remember the Big Three of Childhood Diseases because I had all of them. I am of that vintage where I was young enough to be vaccinated against smallpox and polio (for which I am abundantly grateful, let me tell you). But I had mumps (on at least one side), and rubella, (and chicken pox, the also-ran of childhood diseases), and measles.

My memories of chicken pox involve feeling ill on the day I was supposed to go to the Zoo with my best friend, and lying on the hall floor in our apartment swaddled in my quilt, desperately trying to get the energy to leap up and proclaim myself ready to go. I wasn’t and I didn’t. Beyond that, my memory extends to oatmeal baths (intended to soothe the itch, which they really didn’t) and a coloring book about brides, which perpexed me.

My only recollection of mumps–aside from the fact that it hurt like hell–is that I only had the disease on one side. So I looked like half a deranged chipmunk, which is not much of an improvement over full deranged chipmunk. I dimly remember a sigh of parental relief that my brother had the mumps at the same time, “getting it over young”  they said, as mumps has nasty effects on grown men.

I know I had rubella, but I think it was relatively mild (so mild that it left me, I found out years later, with no residual immunity; this matters to me because I have a relative who lost both the baby she was carrying and her subsequent ability to have children, to rubella contracted while she was pregnant. I went out immediately and got vaccinated. Some things you do not mess with).

And then there’s measles. At the time I developed measles I wanted desperately to have freckles. I was at my classmate Judy’s house for a play date–we didn’t call it that then, but that’s what it was–and her mother noted that I had spots, and I recall valiantly insisting they were freckles, which convinced no one, not even me. By the time my mother showed up I was feverish and spotty, and on my way to several weeks of misery. I remember the itchiness–not as bad as chicken pox, but bad enough–and that swimmy, vaguely hallucinatory feeling a high fever can give you. But what I mostly remember is that I was kept in my bed with the shutters drawn against the light, because there was some concern that I could lose my eyesight. I couldn’t read, couldn’t watch TV. My brother and I shared a room, and the dimness..

I remember, when I got really tired of being in bed and was feeling slightly better, getting up to prise the shutters open and peer out on the sunlit street, only to have my mother sweep in, slamming the shutters closed and ordering me back into bed, afraid the light would damage my weakened eyes. That kind of fear, in an adult, is upsetting to a kid. It convinced me, as no number of homilies would have done, that I couldbe blinded–not in an interesting “our TV hero is briefly struck blind and must have adventures in spite of it” way, but permanently deprived of sight. I went back to bed, and kept my eyes squeezed tightly closed for an hour afterward.

So when I hear someone say “hey, kids used to get these diseases all the time, what’s the big deal?” I think of me, in bed, with my eyes squeezed tight, hoping that when I opened them the world would still be there.

We are not used to being really sick, or rather, we have a tendency, as a society, to define sick as cancer or some other Big! Dramatic! disease. Deborah Ross noted, a few weeks ago, that vaccination is not a tomayto/tomahtodisagreement. I second that emotion. And for those parents who are too young to remember what the fever and misery and itches and–yes–the threat of encephalitis or deafness or blindness that was a routine accompaniment to those childhood diseases that “everybody had” in the good old days–let me say, on behalf of your children: this is not a rite of passage. It’s a life-threatening experience that can be avoided. Avoid it.