Night of the Cake (or The Cake Also Rises) 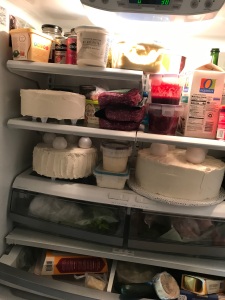 So my daughter is getting married tomorrow afternoon. Outside (in December in Northern California, that means a balmy 40-50 degrees. The bridal party will wear parkas) at the home of a friend. In order to do it all as cheaply as possible (their choice–they’re poor as church mice, and every time we point out that the Parents of the Bride traditionally carry many of the costs, they say “but still…” which is noble but occasionally annoying, as I’ve had to reassure the kid over and over that the costs she’s incurring are reasonable and well within tolerances, etc.) it is pared down and a potluck, and I expect it will be very merry notwithstanding..

And of course I’m making the cake. Which is actually three cakes, in order to meet the dietary needs of all parties:

All three tiers are, as of this writing, made, frosted, and ready for stacking (the globes are attached to pillars which will keep the various tiers from cross contamination). I am still figuring out how the hell we’re going to transport the tiers to the site and keep them chilled (probably just leaving them outside over night will do it).

My refrigerator is a jumble of things shoved where things do not normally go, in order to accommodate all that cake. And I keep thinking that if I’d had more leisure to make it beautiful I would have done so… but I may have reached the limits of my skills.

It’s cake. And frosting. It will taste good. That’s the important bit, I think.

And at the end of the day the really important thing is that the kid is getting married, and a long and goony life extends before her with her sweetie.