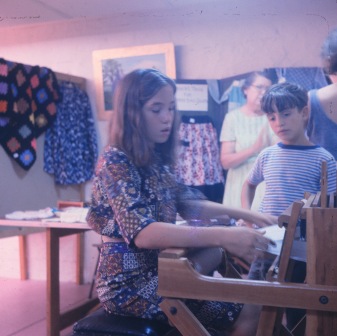 When my peers were taking piano lessons, I was taking weaving lessons. My family placed a premium on the arts and the more esoteric crafts, and when my parents realized that we had a professional weaver living down the road from our weekend house in the country, my fate was sealed. Not that I protested: even as a kid I loved knowing how things got made.

My teacher was a stately octogenarian named Hazel Warren, whom my father had the temerity to call “Hazel-baby.” I called her Mrs. Warren, because, well, I was ten. Hazel Warren was a craftswoman of extraordinary skill–and a fondness for Eisenhower-era colors (mustard yellow, lima bean green, Wedgewood blue). Every Saturday morning for three years I spent two hours with her, learning to weave on a four-frame floor loom.

Mrs. Warren’s weaving studio–a small barn attached to the farmhouse where she and her dapper husband Harry lived–held perhaps half a dozen floor looms, lengths of woven fabric, skeins of cotton and wool. There was a sign over the door with a winged shuttle (in that way that you don’t register the what of something for years, I was well past my weaving-lesson years when I realized what that image was). I don’t remember much about the actual tuition; what I recall is the quality of sunlight on those Saturday mornings, and reaching my toes down to work the treadles that moved the different frames up and down, and (when I got the pattern wrong) having to figure out where I’d gone wrong and undo the weaving. Mrs. Warren was soft spoken and patient, but inexorable. If you messed up, you fixed it. No kissing-it-up-to-God and forging onward.

On one memorable occasion she taught me how to string the loom (up to that point I had been all weaving and no set up). It involved an unbelievable amount of arithmetic, and confused me. In the end it got done: the actual work was long and painstaking–thousands of feet of cotton thread, all threaded through the tiny eyes of the frames–but not technically difficult. Except for the arithmetic. Fifty years later, if forced at gunpoint to set up a loom, I could probably figure it out (except for the math).

Among my peers, if the subject ever came up, I suspect this was just another reason I was weird. But I made placemats (everyone makes placemats), and a set of five ties (I gave one to my eighth grade teacher, on whom I had a bit of a crush), and I don’t know what all else.  Curiously, when we moved up to Massachusetts from New York full time, I had stopped weaving–perhaps we couldn’t afford the lessons, or maybe Mrs. Warren had got out of the business.

But weaving wasn’t done with us. When I was in high school my mother bought a four-frame loom and had it strung with a spring-green wool, with the intention to weave curtains for the living room.  Bear in mind that the entire west face of the Barn was windows, each about seven feet high and five feet across. Weaving fabric for curtains for all of them would have been a breathtaking amount of work, even for someone who had been weaving for years. And it was my mother’s first project. I think, over the next five or six years, Mom managed to weave about two yards of 48″ wide fabric. Ultimately the wool began to crack and break (wool left wound on a loom for long enough is subject to the slings and arrows of climate and light, with predictable results). I cut the two yards of fabric off the loom and it became a shawl of sorts, and a dress-up item when my daughters were of dress-up age.

And the loom? It stood, unthreaded, in the front hall of the Barn, for another twenty years, until I sold the place. At which point I disassembled the loom, packed it carefully, and had it shipped out west to California. It is still upstairs–I checked the other day. Perhaps, when I am no longer working a day job, I will bring it down and reassemble it–that in itself may be an interesting task) and find someone to help me string it, and I’ll try weaving again. I remember it, as an activity, with great fondness.