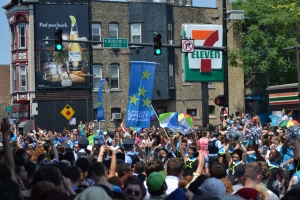 I walk–more or less–the way I drive. I stay on the right, pass slower moving people in front of me on the left, and do a lot of passing. I am not particularly patient about people who–for lack of a better term–walk while rude. I wish I were more patient–it would make me happy to be more virtuous. But honestly.

What constitutes walking while rude?

This last form of incivility I find particularly irksome. Why can’t we all just get along?

Illustrative Anecdote: about ten years ago I was chaperoning a high school field trip. The gaggle of tenth graders stopped at the corner on the way to BART–except for one kid who forged across the street–despite the fact that there was already an SUV already in the intersection, bearing down on him. I grabbed his hood and pulled him back. He wheeled around, confounded: “What?” I pointed out that the SUV might have hit him. “They can’t. It’s against the law.” I, dumbfounded, pointed out that the law of physics trumped those of mankind, and that he might well be killed. “Well then my parents would sue!” “AND YOU’D STILL BE DEAD!” (By that time I had veered from impatient to outright cranky.)

I am no saint. As I’ve said: I’m impatient. I want the people lost in abstraction over their phones to get out of my way–or at least keep to the right, in what in driving would be the slow lane. And yet I look at my phone (worse, I read and walk, and have for years). I do try to stay out of other people’s way, but I am weak and very human, and sometimes fail.

When I find myself being judgmental about other people’s walking manners, I try to remember that I often fail to meet my own high standards. I’m attempting humility. Still, if you see a woman charging through the streets yelling “keep to the right, dammit!” that’s very likely to be me.