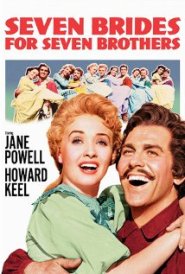 I was going to write about my current obsessive hobby of beading, but then Seven Brides for Seven Brothers was on TV.  And I was appalled all over that I let my impressionable daughters watch it when they were small, and impressed that it didn’t seem to do them any lasting harm.

My family watches a lot of movies, and many of them are old musicals from the 40s and 50s.  Seven Brides for Seven Brothers is a 1954 MGM musical based on a short story by Stephen Vincent Benet called “The Sobbin’ Women.” Out in the pioneer northwest, a man decides he needs a wife, goes into town, finds one, marries her (she falls in love with him; what his feelings for her are is unclear), and brings her home to cook and clean for himself and his six half-civilized brothers.  Millie (the wife) civilizes the boys a bit, and eventually, after meeting some nice girls from town at a barn raising, the boys (led by big brother Adam, who read Plutarch’s “Rape of the Sabine Women”) go to town and kidnap the girls.  The townsfolk are prevented from rescuing their daughters until the pass clears (convenient avalanche), but Millie staunchly defends the girls’ virtue through the long winter that follows.  In the end, everyone winds up married.  The lesson about being kidnapped?  “They acted angry and annoyed, but secretly they was overjoyed…”

No, this is not a feminist movie. It’s pretty much rape-culture with music.

Why watch it?  It’s pretty, the music is pleasant (although the lyrics are just passable:”Can’t make no vows to a herd of cows…”) and the stars work hard.  Mostly, it has spectacular, athletic, muscular dancing.  The barn raising dance, in particular, is just…wow.  You briefly forget all about the political incorrectness of the surroundings and just gape in awe.

My daughters loved Seven Brides.  It also led to interesting conversations. Oh, we had interesting conversations about all sorts of movies, which often led to what I call “Well, dear,” explanations.  As in: “Mama, why are all those men in turbans so angry with Shirley Temple’s grandfather?” “Well, dear, the British occupation of India…” A movie like Seven Brides required several conversations, which led to more “Well, dear” moments (“No, honey, girls couldn’t vote in America until 1919.” “But that’s not fair!!!” “No, sweetie, it wasn’t.”).  The fact that the hero of Seven Brides is apparently a sociopath who doesn’t understand why his behavior is reprehensible until he has a daughter of his own, led to its own subset of conversations, as did the fact that the brothers start out regarding Millie as a food-making, clothes-washing robot.  (“Well, what are they doing?”)

Many of the films I loved and watched uncritically when I was a kid now reveal their age and the deep wells of misogyny of the time.  When my older daughter was about eleven, Adam’s Rib, one of the great Tracy-Hepburn comedies of the 40s, was on.  “Ooh, let’s watch.  It’s fun.”  It is fun, but it’s also blisteringly anti-feminist, and treats the heroine’s job (she’s a lawyer) with a kind of “isn’t that cute” contempt that is mind-boggling.  The plot revolves around a couple, both lawyers, who are on opposite sides in a case, with Hepburn defending a woman (Judy Holliday) who discovers that her husband has a mistress, and tries to kill them.  (The fact that Holliday and the “other woman”, Jean Hagen, are playing essentially the same character, is part of the joke.)  The jokes are classist as well as sexist…the more I talk about it, the more appalling it looms in my memory.  And yet.  The movie works because the cast–all of them, Tracy, Hepburn, Tom Ewell, Hagen, David Wayne, and Holliday–are so amazingly good.  With lousy actors it would be a dreary, humiliating mess.

Julie watched it and turned to me with dismay.  “Do all those men realize they’re condescending to Katharine Hepburn?”  We had discussions.  We did agree that while the movie made fun of Hepburn’s character’s passion and intelligence in the cause of her client, it also made it clear that what drew Tracy to her in the first place is that same passion and intelligence.  The movie also makes great hay of Tracy behaving like a manipulative creep–although it suggests that he’s using women’s tricks to get what he wants.

This led to watching more Tracy-Hepburn movies: Pat and Mike, Woman of the Year, Desk Set.  In all of them, Hepburn’s character is a working woman: an athlete, a reporter, the head of a TV network’s research division.  And in all of them, in the end, the path to romance keeps coming up against career, pretty much to the detriment of career.  Until she gets her priorities straight, of course.  After each film the discussions flew thick and fast, and led to Julie at one point holding up White Christmas, of all things, as a better movie on feminist terms, because no one thinks for a moment that there’s anything “cute” or out of line about the two sisters in the show having jobs.  Except that the jobs are as two halves of a sister singing act, I pointed out.  If one of them had been a brain surgeon or a politician I doubt the people around them would have been so understanding.

There are no right answers to how to handle old material.  I will still watch Seven Brides, and Adam’s Rib, and White Christmas, and the rest, and enjoy what I find to enjoy in them.  And I’m glad I showed them to the girls; I kind of think that seeing the films encouraged the discussions that led to both of them becoming feminists (and they are, boy howdy).  Another mother might have refused to give them shelf space; as I said: no right answers.

But honestly, how does anyone get away with condescending to Katharine Hepburn?