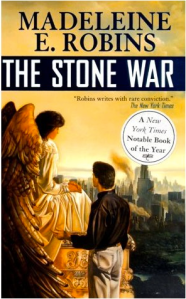 In the early 90s I started writing the book that became The Stone War. It’s–for lack of a better term–a home-town apocalypse book about a disaster, or rather disasters, befalling New York City. The Stone War was published in 1999; after 9/11, a number of people (none of them New Yorkers) said brightly, “Oh, it’s just like your book!” No, it was not; the only similarity was in scenes, early on, of people walking away from the site of the disaster. Like you might, if something frightening and huge happened.

Now I’m thinking maybe I was prescient in another way. The Stone War is about a bunch of people who come together to try to survive in a blighted and frankly unreliable landscape, a place booby-trapped with standing pools of very dark power. Rather than holing up with hoarded supplies and attempt to outlast the disaster, they join together. They work together because they are not sure when or if help will come, and because working together makes them stronger and safer than staying apart.

When I wrote The Stone War I thought I was writing a book about someone whose most central relationship is with a place-and what that relationship does to the people around him. But he has people around him; it never occurs to him not to gather in anyone who is willing to help. Somehow, I wrote a book about what happens when people come together–even apart–to take care of each other.