So, What Do You Write?

There are a list of questions that writers get fairly routinely, most of them springing from the GP (general population)’s odd ideas about the writing life, which seem to arise from years of TV and movies, prejudices for and against the “artistic life,” and vague recollections of their own dislike of writing essays in school.  There are business questions (“so how much did you get paid for writing that book?” and its opposite-twin, “how much did you have to pay to get that book published?”), glorious fantasy questions (“so which… Read more So, What Do You Write? →

Distraction and The Sistine Chapel Effect

Sometimes, when the writing is being uncooperative, you need to do something else. It’s a nice thing when someone asks you to do that something else, so you can pretend… Read more Distraction and The Sistine Chapel Effect →

My younger daughter, a high school freshman, has hit one of those adolescent patches where she can’t go to sleep.  Given that this makes her soggy to the point of uselessness in the morning (getting her out of the house can be a little like rolling a boulder composed of Jello uphill), we’re working with her, as the jargon goes, to help her get her sleep mojo back.  Some of this involves impounding her computer at 10pm and suggesting that she do something quiet and non-screen related: read, play guitar,… Read more Bedtime Stories → 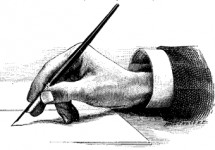 Let Them Have Their Say

In the last year I have finished and turned in two books.  Because the watchword of writing is “What have you done for me lately,” I immediately started thinking of… Read more Let Them Have Their Say →

I wrote my first book because I couldn’t find anything I wanted to read. Really, it’s as simple as that.  And as complex as that, too.  I had just graduated… Read more →

Writing gives you the illusion of control, and then you realize it’s just an illusion, that people are going to bring their own stuff into it. –David Sedaris Welcome.  If… Read more writer*editor*occasional baker →