Charlotte Is My Brontë 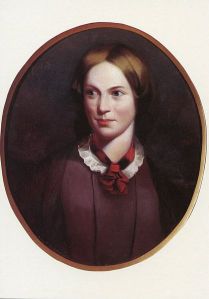 In high school I had a teacher who loved Wuthering Heights.  I was, I blush to say, a bit of a suck-up in English class because I loved the subject, I loved writing about books and writing, and I didn’t see any reason to be all cool about it. Except when we read Wuthering Heights. Then I had to fake it: I read the book and took the test and did the essay, but all the time that I was paying attention to the fact that Nelly Dean is an unreliable narrator and Edgar Linton is Heathcliff’s pale reflection and yada-yada, I was suppressing the urge to stand up in class and scream.  I just wanted to smack them all: Heathcliff and Catherine and Edgar and his dopey sister Isabella.  My teacher, and indeed several other girls in the class, found Wuthering Heights to be the apotheosis of romance.  I couldn’t finish the damned book fast enough.  I admire the skill and artistry of WH, but I still want to kick the characters.

I’m not anti-Brontë.  I admire Anne’s The Tenant of Wildfell Hall (which has probably the most rounded and compelling character-inspired-by-Branwell-Brontë, the dreadful Arthur Huntingdon). But for me Emily suffers by comparison with her sister Charlotte.  I am an unabashed fan of Jane Eyre. Jane may, in fact, be my favorite character ever (the fact that Jane might push Elinor Dashwood and Anne Elliott out of the way says a lot about my feelings for her).  It drives me crazy when the book is shrugged off as the grandmother of gothic romance; Jane Eyre is about a woman who is, as she says to Rochester, poor, plain and obscure–but also fiercely principled, even when it costs her what she loves.  Jane doesn’t want to be a rock star; she doesn’t want to vote, or run off and join the circus; she wants something even more unsettling for her time and place: she wants to be taken seriously as a human being.

Some people complain about the first part of the book, the “Jane’s background and education” section.  But unless you know the things that are revealed there, both the awful treatment to which Jane is subjected, her gratitude and affection for the small scraps of kindness she encounters, her education, and most particularly the fact that even as a child there’s a war in Jane between her hunger for love and her hunger to be treated like a person regardless of her status, the book doesn’t work.  Jane doesn’t live in a time or place that values or even understands that second yearning.  But until you understand Jane’s moral education and her character, you (the modern reader) can’t understand why she doesn’t just stay with Rochester when his marriage is discovered.  Why she’d rather starve on the moors than take anything from him when she leaves.  And why she’s able to hold out against the cold, loveless proposals of her self-imolating cousin St. John Rivers.  Jane is a whole human being, and she wants to be taken as a whole human being.  And you know what?  Rochester is the only one who sees that, values her, and loves her for her whole self.

And Rochester.  Wow.  Rochester is sort of where Charlotte Brontë blows me away.  The first time I read Jane Eyre I could not understand what in God’s name Rochester was up to, playing c’mere, c’mere, c’mere/g’way, g’way, g’way with Jane as he does.  The scene under the oak where he finally declares himself is painful, not least because he forces Jane to declare herself before he tells her that he loves her too.  He treats her horribly in that scene, lays her out bare; what sort of sadist is he? Simple: he has a secret: a wife.  He has to make absolutely certain that Jane is in love him before he can declare himself.  Until they marry and she becomes complicit in his bigamy he has to keep her off balance, because he knows her, he knows that she won’t put up with what he’s proposing, that she’ll see through his sophistic reasoning and do exactly what she winds up doing–running away, for his sake and her own.  He’s a son of a bitch to her because he recognizes her for the person she is, and he wants her (I’ve heard it argued that Rochester winds up maimed at the end because that “levels” him and Jane; I’d say rather that he has to be punished for his falseness before he can have a happy ending).

I could go on.  I love this book and I am constantly amazed by what I find in it.  Jane Eyre is heroic without being priggish, fierce without being hostile, funny (yes, seriously), hardworking, and I love her.